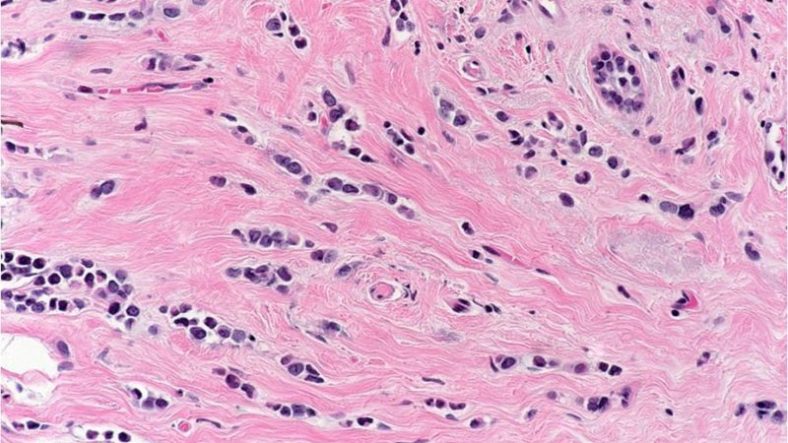 The use of histologic grading in breast cancer is a time-honored tradition grounded in decades of controversy. To wit…

Having witnessed the 1991 Elston-Ellis modification (now Nottingham), it was “peace at last” as both reproducibility and reasonable prognostic information were confirmed…at least to an acceptable degree at the time (What pathologist doesn’t waffle between Grade 2 & 3 on occasion?)

Left out in the cold, however, with the adoption of the Nottingham system was invasive lobular carcinoma (ILC). By definition, the histology of ILC does not allow tubule formation as a feature. So, a low grade ILC gets penalized with 3 points before one ever gets to the true distinguishing features – mitoses and nuclear pleomorphism. This creates the bizarre situation wherein invasive ductal grading starts with a minimum total of 3 points, whereas an ILC (a slightly more favorable histology) starts with a minimum of 5 points, ready to leap into the Grade 2 category. One simple, subjective, slip-up here (a 2 for either mitoses or pleomorphism), and you’ve turned a truly Grade 1 cancer into Grade 2 with a total score of 6.

Note that the long-discredited Black Grading System is custom-made for ILC, as the Black system does not count tubule formation in the first place. In this era of software medicine and synoptic reporting, most pathologists reluctantly comply and slap a “3” onto ILC from the git-go due to the lack of tubule formation, rationalizing that it really doesn’t make that much difference. And in this era where systemic treatments are based on other markers, this appears to be correct.

Some pathologists prefer the purist approach and will avoid grading ILC using the Nottingham system altogether, while others have taken an active stance of resistance, pointing out the need for a 2-tiered system applicable to ILC only (e.g., Adams Al, et al. Histologic grading of invasive lobular carcinoma: does use of a 2-tiered nuclear grading system improve interobserver variability? Ann Diag Pathol 2009; 13:223-225).

In general, however, most go with the flow, and as stated in one major medical center’s guidelines for pathologists – “Although classic lobular carcinoma by definition is scored as 3 for lack of tubule formation, cases will receive scores of 1 for nuclear pleomorphism and the mitotic count will usually be low, resulting in an overall score of grade 1.” Not quite – I’ve seen (in print), the remarkable claim that “classic ILC is a Grade 2 tumor,” demonstrating how error can disguise itself as the norm. In fact, classic ILC has cells that are so bland they can appear to be lymphocytes, such that the slightest pleomorphism can add the dreaded 2-point burden, thereby converting a Grade 1 to Grade 2. When I reviewed our classic invasive lobulars for the past 3 years, it was an even split – half were Grade 1 and half were Grade 2. From the biologic standpoint, and if put on equivalent footing with ductal, nearly all would be Grade 1.

(As an aside, I still hear comments that “invasive lobular is more aggressive than ductal,” which is not the case. Instead, ILC is much more likely to be missed on clinical exam and mammography such that we often encounter insidious, advanced stage tumors. The clinical impression comes from delayed diagnosis, not inherent biology…with the exception of pleomorphic lobular.)

To be fair, one rare variation of ILC forms tubules – a tubulolobular. As a result, nearly all tubulolobulars will end up as Grade 1. However, the other variants – classic, solid, mixed and alveolar (pleomorphic addressed below) – have no tubule formation whatsoever as part of the diagnostic criteria.

In fact, most prefer to call tubulobulars a distinct histologic sub-type rather than an ILC variant. In this scenario, the next step up in Grade will yield a diagnosis of “ducto-lobular” or “mixed ductal and lobular” with a variable e-cadherin pattern just adding to the confusion.

Until recently, the issue of flawed grading in ILC rarely altered therapy, so “who cares if we practice sloppy grading?” After all, treatment is based on tumor size, nodal status, ER/PR, HER2, and multi-gene panels.

But in January 2018, the AJCC announced version 8.0 of the breast cancer staging criteria, and with one fell swoop, histologic grade (formerly a distinct “marker”) was merged into the staging system. Finally, I thought, this serious defect in a grading system for ILC will get some attention and be corrected. If not, then we’re going to have a faulty grade convert to a faulty stage which converts to faulty therapy.

So, the first thing I did when I finally figured out how to calculate 8.0 Stage was walk through all possibilities using Grade 1 versus Grade 2, as this is where aberrant use of the Nottingham system for ILC will hurt – converting what should be Grade 1 to Grade 2. Amazingly, there were no alterations in Stage! Be it Grade 1 or Grade 2, the Stage was the same.

This was not true for Grade 2 vs. Grade 3 where one can demonstrate some differences imparted to Stage, but this is toward the pleomorphic ILC end of things where overtreatment is unlikely to occur. For an ILC to receive Grade 3, even with tubule formation getting penalized to a 3, mitotic count and pleomorphism have to add up to 5 or 6 – by definition, not “classic” ILC – and by then, the alert will sound that this is “pleomorphic ILC.” Here, the resultant higher stage supports the need for aggressive systemic therapy.

The tougher issue, addressed herein, is whether or not the 3 points for “no tubules” might take someone from Grade 1 to Grade 2 with an advance in Stage that prompts systemic therapy that would not otherwise be recommended. And, after all my belly-aching above, it does not appear this “over-grading” will happen with the new 8.0 staging system. Multi-gene tumor profiles make it even less likely.

So, in the end, we can all return to our deep slumber and ignore the fact that invasive lobular carcinoma is irrationally graded as a matter of routine, with a 3-stroke penalty before the game even begins.