Today, the decision barely raises an eyebrow. But going back to the days when the word BREAST was considered inappropriate for public signage, those of us who left general surgery to become breast surgeons unwittingly became curiosities at the same time. “Why would you do that?” (friends and colleagues would say). Breast surgery wasn’t even a recognized sub-specialty. There were no fellowships, no special certificates, and no movement toward any of these credentialing efforts.

The closest thing to getting some sort of training in breast surgery was through a surgical oncology fellowship, wherein breast cancer was a relatively small part of the picture. One of the fellowships I checked out in the early 1980s was dedicated to one guiding principle – the administration of chemotherapy. The purpose was clear: “We can’t let the new specialty of medical oncology take away a treatment strategy that was begun by surgeons.”

Then there are personal reasons for the switch from general to breast as well. In most cases, it’s probably multi-factorial. I sometimes joke (that is, half-joke) that it was my experience as a trauma surgeon (no sleep) that convinced me to become a breast surgeon (sleep). Many observers, however, insist on clear-cut motivations, to the point that beliefs emerge out of nowhere, such as one claim often stated about me: “His mother died of breast cancer, and he decided to dedicate his life to the disease.” Not true.

As one starts to visualize a horizon ahead that says “you won’t be working forever,” you can get a little sentimental, posing to yourself the simple question: “How did I end up here?” Recently, I decided a worthy project over the next few years would be to transfer several thousand 35mm slides to digital format. That process has brought back memories, good and bad. But a few slides reminded me recently of the REAL reason that I switched to breast cancer, at least the most significant event that pointed me in that direction, albeit a 7-year delay before it actually happened.

My practice location at the time? Marina del Rey, CA

A CME event: the 19th National Conference on Breast Cancer

To practice general surgery in Los Angeles, you needed a niche. “General” was just too broad of a stroke. All signs pointed to trauma surgery for me, not the least of which was the fact that I was the only surgeon at my hospital who had opted to get ATLS certified, then instructor-certified. This happened at the same time when the current Trauma Center System was introduced nationally, and my hospital (Daniel Freeman) decided to make a bid for Level II status, one of 15 centers needed to cover Los Angeles. After our bid was successful, I was named Medical Director by default.

Back to 1981, when I had just completed my boards and felt that I deserved a vacation, I spotted a CME offering at the Hotel del Coronado, a.k.a. the Hotel Del. I had very little, if any, interest in breast cancer at the time (biopsy-mastectomy was not very challenging), but I was not going for the educational experience. CME attendance in those days was semi-optional, so I would sign in, listen to a talk or two, then head for the beach. After all, what could I learn at this point, after I had just aced my Boards.

But a funny thing happened on the way to the beach. One talk turned into “just one more,” which turned into another, and 5 days later, I’d attended every presentation. Why? Because every talk, every subject, every presentation, was completely foreign to me. I didn’t have a clue what was going on in the world of breast cancer. And for the most part, neither did the American College of Surgeons.

The sponsors of that meeting were the American College of Radiology, co-sponsored by the American Cancer Society, the College of American Pathologists, and the Society for the Study of Breast Disease. A long list of other supporting organizations was printed on the program, and the only thing I remember is the total absence of any organization representing the specialty that insisted they were in total control of the management of breast cancer – general surgeons.

Yet, what I heard at the 5-day conference was stunning – the Italians were there with their “quadrantectomy” results coupled to the crazy idea of giving chemotherapy even without proof of metastatic disease (“adjuvant” was a new concept). The radiologists showed mammograms (the first ones I’d ever seen), showing how little clusters of calcium could actually be early cancer. Alternative forms of imaging were introduced – I remember one photo of an entire room full of equipment arranged Rube Goldberg-style, with a woman in the middle of the room, face down, her breasts emerged in a pool of gel (it was a prototype of something new on the market today – whole breast ultrasound). I was overwhelmed. My thoughts: No one in my circle knows this is going on, and I don’t think the public does either. When this stuff goes mainstream, there’s going to be a revolution. Yet, my specialty is not even listed in the program.

Shortly after returning from the conference, I encountered my first patient who requested the newfangled “lumpectomy” for her breast cancer. She had decided that she would rather be seen by a so-called breast surgeon, a certain Mel Silverstein, MD, who had just opened the first freestanding breast center in Van Nuys, 45 minutes north of my office in Marina del Rey. 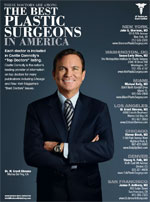 Grant encouraged me to think about violating the taboos associated with immediate reconstruction, and I “broke the rules” by including Grant on my mastectomies whereupon he skillfully restored patients. One thing led to another, and we began to partner in a strategy to compete with the popular breast center at Van Nuys. We approached our administration about the idea of a “breast center,” and shortly thereafter, the Daniel Freeman Marina Breast Center was born. At least, it was born in the sense of newspaper ads and a lot of talk and publicity. We were still missing some key components, starting with a true multidisciplinary effort.

Several years had gone by since the Hotel Del experience, but its effects were long-lasting. And if I were to direct the Daniel Freeman Marina Breast Center, I should self-educate accordingly. Step One was reading the Harris text, Breast Diseases (Lippincott), the 1987 hot-of-the-press edition – cover to cover, complete with highlighting and re-reading. This had the same effect as Hotel Del, only magnified. The amount of clinically useful information “out there” about breast cancer was overwhelming.

The story then takes a circuitous path after a chance meeting with my old mentor in Oklahoma, G. Rainey Williams, MD, Chairman of the Department of Surgery at OU. Dr. Williams informed me that they were trying to organize a multidisciplinary breast cancer program at the University of Oklahoma…and would I be interested in returning to join the faculty at my alma mater?

After I said “Yes,” I kicked my self-induced-fellowship into high gear, focusing on two areas of interest – 1) Borderline breast lesions where I procured several sets of teaching slides – and since I’d done a one-year pathology fellowship at UCLA, was able to develop expertise. Then, Dr. David Page at Vanderbilt served as my resource, reviewing difficult slides for many years thereafter. And then, 2) Breast Imaging where I became an early skeptic of mammographic sensitivity as related to breast density, based on my patient population, with this particular pathway eventually leading me out of surgery entirely (2005) to focus on multi-modality imaging approaches.

This whole sentimental journey back to the Hotel Del began with a different intent. I was trying to document the history of “breast conferences” and could not remember the name of the meeting I’d attended in San Diego in 1981. While many believe the San Antonio Breast Cancer Symposium to be the oldest conference, you might have noticed something different from the name of my Hotel Del meeting – the 19th National Conference on Breast Cancer. This means the conference began in 1962, long before San Antonio was established in 1977.

As I tried to trace the “National Conference on Breast Cancer” throughout the years, it seems to have lost its luster with the arrival of new players on the scene. For instance, the popular Miami Breast Cancer Conference began in 1983, then a whole slew of conference options appeared on the scene. Best I can tell, the “National Conference on Breast Cancer” switched to a biennial format, with the last documented meeting I found taking place in 2014. I don’t know if this outreach of the American College of Radiology was phased out with the rise of the Society of Breast Imaging, or perhaps, the ancient conference is still in existence under a different name.

But then, in the process of searching for the fate of the National Conference on Breast Cancer, my eyes fell again upon the sponsors where I found the Society for the Study of Breast Disease (which, of course, meant nothing to me in 1981). But in 1992, I joined that society, a relative late-comer when one considers it was founded in 1979 (by two gynecologists). Dr. Istvan Nyirjesy and Dr. Doug Marchant had toyed with the idea of such a society as early as 1976, and I’m not certain of the official date of the founding, but both men served as presidents of the SSBD, first Nyirjesy in 1979-1981, then Marchant from 1981-1983. Dr. Marchant also had the distinction of starting the first university-based multidisciplinary breast center at Tufts in 1977. (Dr. Silverstein’s claim as “first” is still intact, given that he always includes the qualifier “free-standing.”)

In 1992, I sent my application to the Society for the Study of Breast Disease, to the late George Peters, MD, in Dallas, who served as the society’s 8th president. Circa 1994, the name of the society seemed a bit tedious, and we became the American Society of Breast Disease. This multidisciplinary organization thrived, and it was the society where I intended to participate actively. In 2006 (one year before ACS guidelines for screening MRI), I became the first non-radiologist to present screening data for breast MRI, my talk given to the general assembly of the American Society of Breast Disease, along with my strategy of patient selection (combining density with risk levels in a scoring system that translated to a screening interval for MRI – to this day, I still think it’s a much better approach than current guidelines).

That said, the ASBD was at its peak around this time, while a maverick organization (the American Society of Breast Surgeons) was making its mark and stealing thunder. Soon, the ASBD withered away and was gobbled up by the National Consortium of Breast Centers (2015, I believe), and was never heard from again.

I had bet on the wrong horse, but decided by then that I didn’t need to belong to the new ASBrS because I was no longer doing surgery, devoting my time entirely to multi-modality high-risk screening and genetics. But I was pulled through the back door to join ASBrS when, after several years of speaking at its meetings, I got a phone call from then-president Peter Beitsch, MD, who said (in more colorful words than I’ve stated here): “I just found out that you’re not even a member of ASBrS, yet I just appointed you to our ad hoc committee on screening. You need to join up.” So I did.

It’s been almost 40 years since my beach blanket bingo trip to the Hotel Del backfired on me and turned me into a breast disease specialist. And what a ride it’s been! As you get older and begin to contemplate an exit strategy, you drum up mixed feelings, not really sure what to do in your remaining productive years. My solution?…Take a trip to the Hotel Del and see what happens next.